To Start, these are very attractive models, designed after one of the most common designs, of a rod type steam locomotive that people think of when they think of a steam-powered locomotive.

These models are no exception, they were designed to be attractive with what is called the Russian iron colored boiler jacket, brass fixtures, and finishing and so on. when dressed up as this one, they were often kept clean, and the brass regularly polished.

Bachmann makes these as part of the Spectrum line of models. – which means they are higher quality with a lot of fine details.  but, they also have some problems, some of them have brittle plastics, with fine details that break. they also use nylon gears on the main drive gear, that have a high failure rate, it’s not uncommon to take one of these locomotives out of the box, and not have it run.

I believe that was the case with this locomotive.

the 1st aspect of working on this locomotive was to fix it, so that would move, then install the decoder.

So, I started by removing the gearbox, and opening it, to find what I suspected, the drive gear was split, as you should able to see in the photo, so, I ordered a replacement one from Bachmann. when I got that gear, I installed it about put the locomotive back together. 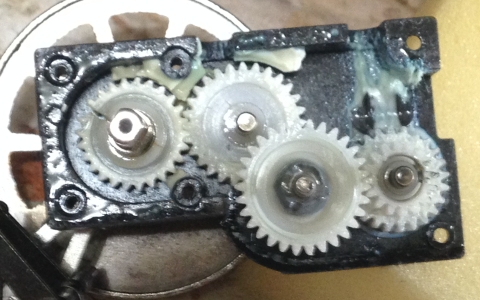 so, far so good, I had already done a basic install on the decoder, I could now move the locomotive, except that it would move, then stop, it then after manually pushing the wheels, it would again move. after some testing, I once again took the gearbox out.

and found a few different issues.

At this point, I discussed rebusing the gearbox, as to if the noise filter was really needed, and having a clockmaker I know, make a new gear.

From here,  I looked on the Bachmann’s page and had a new gearbox and motor ordered. along with replacement gear from Northwest Short Line. The gears that make are machined replacements for several Bachmann Locomotives and made from a material called delrin.

here’s the fun part, because I needed to access wires in the boiler, I simply removed the whole top of the locomotive from its running gear. I finished putting the running gear back together and tested it.

I’m pleased to say, then I believe the gearbox runs better than what Bachmann originally sold.

Here’s a video of the chassis, testing both it’s power picks, by feeding the decoder installed on a test board, and driving the motor with the same decoder.  the timing for the sound is off, but all of the concentric and side rods work correctly. the gearbox runs a lot smoother sitting on the bench too.

The next thing I did, while I had the locomotive apart was to upgrade the lighting in the ashpan, here’s a brief video of the lights running before closing everything up. For these, I used the fire lighting kit from Evan Designs

here’s the locomotive mostly assembled, with chuff timing adjusted and the new lights installed in the ash pan. 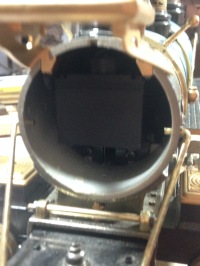 once this was figured out I did the smoke test

Then finally, here the locomotive is running, on the tracks.