The Shay has come a long way from where I started.

it was, inoperable, someone had done a hack job,  bypassing the wiring, running wires to trucks then out the back, they started doing basic but crude weathering. then apparently gave up and sold it.  with statements that it was battery ready or had been converted to airwire.

This is a photo of how I received it.  since then, and it’s weathering is a long process. as the owner wanted chuffed smoke, lights etc. but set up with airwire & batteries etc. installed I opted to set it up as what is being called a DCC deadrail system.  basically, this means it means that the DCC decoder pulls it’s main power from a battery and has a receiver installed.   there’s a lot of technical info and discussion about DC, DCC, RCC and DCC Deadrail. each breaking into their own aspects.

without getting into that, part of the rebuild has been to remove all electronics, running new wires, lights, and motors, effectively rebuilding the entire locomotive.

somewhere after I got the basic decoder working and smoke installed, the owner decided to have me change the cab out, thus I took the locomotive cab off. I made this short video of the sound and smoke, and new motors, as the idea behind this locomotive is to be a DCC Deadrail install there are no power pickups in the wheels, thus it’s presently controlled and programmed via the wires.

the owner chooses to have my install a Banta Wood cab. he sent me the kit, the cab was designed to be different from Bachmann’s and to represent a winter cab. However, the basic design would have been typically made from metal rather than wood.  also, this design doesn’t lend itself to a Shay that is set up as a wood burner, and with its dynamo located in front of the cab on top of the boiler.  And finally, the owner wanted a wood look for the cab along with some other parts. 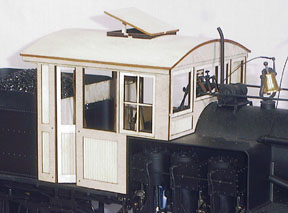 This photo is how it was designed to look.

I also offered the idea of making the Shay look more unique by taking some examples from the Dixana. as I did my research I found a few different examples of shays, that had polished brass cylinder jackets, as well as brightly polished silver colored boiler jackets and so on. 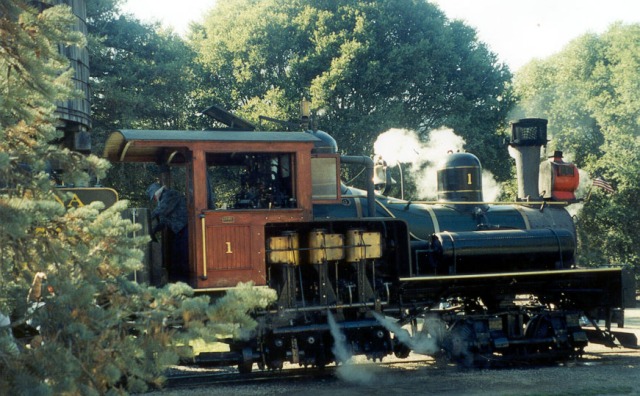 so, here’s the Shay at present, when I get some more of the detail work done, I’ll do another, the video showing off some of the goodies etc.

Note the tender color is now even, waiting for the Wild Horse Valley Railroad logo

I’ve since relocated the cab light, so that the light now points down, rather than back.

here’s everything that’s been done:

— I’m still working, once done, it’s primary power will be batteries with an airwire receiver to control and operate the locomotive, however, there will be a switch to all operations on a DCC system and for programming the decoder.

here’s a bonus few teaser photo’s of some of the work I’ve done today, December 30th, 2017 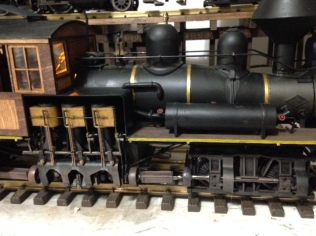